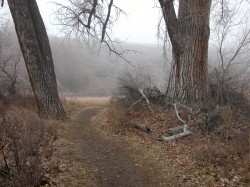 Two Moon Park, named for the Northern Cheyenne chief who fought at the Battle of the Little Bighorn, borders the Yellowstone River on the south and a steep, forested bluff to the north. A grand loop trail runs around the park, but it is intertwined with numerous other paths and trails, some through open meadows and others ducking under Hansel-and-Gretel-like bowers. On the downstream end of the park, the Weeping Wall, shot through with seeping springs, attracts a great variety of birds and mantles the cliffside with sheaths of ice in the winter. At the upper entrance to Two Moon Park , you can hop onto the paved Dutcher Trail, which continues north to the far end of the Heights and upstream to Coulson Park .