This Yellowstone County Park has a very colorful history. It has been through four name changes. The park was created from a generous donation of 38 acres located on the downstream end of the present park. It was named the Fowver Park in honor of the donors of the property. Then it became known as the County Park. The park needed a better name so this was changed to Coulson Park. The Yellowstone Historical Society moved to switch the name of two parks, Two Moon Park located at the former Billings City landfill and Coulson Park since the landfill was in the vicinity of the original town of Coulson.

Two Moon was the last Cheyenne Chief. Wilard Fraiser, former Mayor is credited with naming of the landfill area as Two Moon Park. 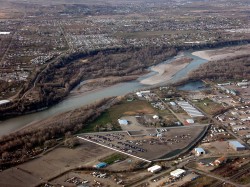 In 1960 the County Commissioners bought a right-of-way between Bench Boulevard and the County Park. Up to that time there was no public access to the area unless you trespassed across the road that was built for Barry 0’Leary’s gravel pit located within the Park.

In 1972 Parque’s sold the 52 acre portion of land east of the County Park to Lloyd L. “Monty” Kimble. In 1974 Monty Kimble sold the property to Yellowstone County using Bureau of Outdoor Recreation funds. This completed the acquisition of the park and at that time it was called Coulson Park.

The next event was the arrival of the Bandidos Motorcycle Club that were going to camp for a couple days in the park before heading east. They were driven from the park by a combination of vigilantes and the Yellowstone County Sheriff’s Department.

Upon their departure the County Commissioners barricaded the park entrance with large boulders taken from the construction of the nearby METRA arena at the fairgrounds.

The Yellowstone Valley Audubon Chapter had been advocating the closure of the park for some time. When the barricades when up they installed the signage when entering the park.

Since 1993 the Yellowstone River Parks Association, in conjunction with the Yellowstone County Park Board started the development of trails and other infrastructure improvements within now Two Moon Park.

The transition continued in 2002 with the Billings City Parks Department taking over part of Two Moon Park.